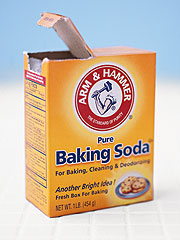 On the internet there are claims that researchers at University of Arizona are planning clinical trials on the use of baking soda as treatment of cancer.

Here is the article that allegedly document this claim. But the article does no such thing. The article reports fundings to biomedical engineers who are working on a method to measure pH inside cancers.

Cancers are often more acidic than the rest of the body. How this comes about is described in this post. This may influence the efficacy of some types of chemotherapy. And it may also influence the cancers ability to spread.

There are two paragraphs in the article that may appear to support what the baking soda supporters claim. We will start taking a look at this one:

Drinking baking soda has been proven to reduce or eliminate the spread of breast cancer to the lungs, brain and bone, but too much baking soda can also damage normal organs.

These are the words of the journalist, not necessarily the words of the scientists involved and it may be rooted in the research done by one of the collaborators. The article mentions Ian Robey, assistant professor of research at The University of Arizona Cancer Center. His groups research has previously been misrepresented by followers of Tullio Simoncini.

But let us check a out for  ourselves if it has been proven that drinking baking soda reduces or eliminates the spread of breast cancer to the lungs, brain and bone.

Robey and his group looked into what happens when experimental mice implanted with a cancer cell line are fed with sodium bicarbonate. Since mice are not men, one should always be cautious about concluding directly from such experiments to effects in humans; without experiments in humans it has not been proven to work in humans. However, the results of such experiments can still be informative.

Here is one research paper by Robey’s group  that we will take a look at. The main results were:

1) pH was raised in the tumour stroma, but not inside the tumour cells.
2) pH was unchanged  in normal tissue  (ie. the rest of the body).
3) There were fewer metastases and they were smaller.
4) The growth of the primary cancer was unaffected.

So this study does not prove that spread is eliminated by drinking baking soda.

Here is another interesting paper by Robey’s group. In this study they looked into DCA and sodium bicarbonate (separately and combined). DCA didn’t have any effect, but we won’t go into further details of that aspect of the paper here. Concerning sodium bicarbonate, the main results were:

1) The growth of the primary cancer was unaffected.
2) The amount of metastasis were lower in mice treated with sodium bicarbonate. But the difference was too small to rule out that this observation was a play of chance (i.e. not statistically significant).

So this study does not prove that spread is eliminated by drinking baking soda. It doesn’t event prove that metastases are reduced.

Here is another paragraph in the article:

……Jennifer Barton, professor and head of UA biomedical engineering. “Patients can actually change their body’s pH to make their cancer drugs more effective — it can be as simple as drinking baking soda — but this process has to be carefully monitored.”

The critical word in that paragraph is “body”. In various fora where the article is presented as endorsement of Simoncini’s idea, we are told that a professor says it is easy to increase body pH simply by drinking baking soda.

The results of the mice experiments mentioned above show something completely different. There was an increase in tumour pH, but not of body pH.

Our guess is that this is a misquote that wasn’t caught at proof reading. Not only is it inconsistent with Robey’s results, it is also inconsistent with what we know about the normal systems that keep body pH within a very narrow range.We recommend that you follow these links if you want to understand the physiology of pH regulation in the body. But in short – The body is by nature slightly alkaline with a pH around 7,4. Various regulatory mechanisms in your body work to maintain a stable slightly alkaline pH. This is necessary for the body to function properly.

1) The article is not about clinical trials on sodium bicarbonate as cancer treatment.
2) An increase in tumour pH does not destroy cancer, but it may enhance effects of chemotherapy.
3) The best explanation of the statement that drinking baking soda can increase pH of the body, is that it is a typo.
4) Reduction of amount of new metastasis by drinking baking soda seems like a possibility, but hasn’t been unequivocally proved to happen.

The article this post is based on has been corrected. It no longer says that Drinking baking soda has been proven to reduce or eliminate the spread of breast cancer…..

The part where it says that drinking baking soda can change body pH remains uncorrected even though – as mentioned in the post – the referenced study demonstrated change in tumour pH an not body pH.

92 responses to “Drinking baking soda does not cure cancer”