Homeopathy For Cancer, Endorsed by ASCO?? Not Really 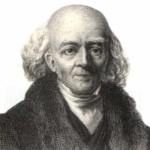 When searching for a non-toxic cancer treatment without any side effects, for many people homeopathy seems an attractive option. And sure enough, there are people out there who try to convince cancer patients that homeopathy is a real option. A strong sales argument would be that conventional science proves it to be effective – and precisely this claim has been made for a homeopathic remedy called Psorinum. END_OF_DOCUMENT_TOKEN_TO_BE_REPLACED 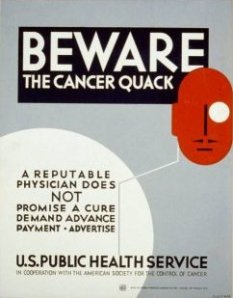 The reason that this blog came to be is the existence of cancer quackery, sometimes called alternative cancer treatments.

Many websites including this blog explain what is wrong with alternative cancer treatments and why they are dangerous and there are horrible examples of what happens to patients who chose to forgo conventional treatment and opt for some kind of alternative treatment instead. But the internet is littered with testimonials touting the successes of miraculous alternative cancer cures that are often claimed to be suppressed. Such testimonials can be very persuasive, especially if the reader/video viewer is afraid and not aware of what to look for, so it is no wonder that people get confused.

END_OF_DOCUMENT_TOKEN_TO_BE_REPLACED

Is Marc Stephens Really A Representative Of Burzynski?

A few days ago jli blogged about a movie that claims to prove the efficacy of Dr. Stanislaw Burzynski’s “antineoplastons” as a cancer cure.

After writing a post on Dr Stanislaw Burzynski, Andy Lewis of the Quackometer received legal threats from someone by the name of Marc Stephens, who claims to represent Burzynski.

This is not the first time this person threatens bloggers in this way. Peter Bowditch of Ratbags.com is another recent example.

The style of his emails does sound a bit lawyerish, but then again – not really.

END_OF_DOCUMENT_TOKEN_TO_BE_REPLACED

Burzynski The Movie: Does It Prove The Efficacy of Antineoplastons Against Cancer?

Stanislaw Burzynski treats cancer patients at a private clinic using what he terms “antineoplastons”: mixtures of peptides, amino acids, and other simple organic substances that are said to promote the body’s natural defenses against cancer. He has published his own studies, but nobody has been able to reproduce the clinical results he claims to have achieved. Recently a movie was released that allegedly shows irrefutable proof that his therapy works as a cure for cancer and that the rest of the medical establishment is conspiring against him.

In this post we will not concern ourselves with conspiracy talk: all we are interested in is to review the evidence presented in the movie (click here).

END_OF_DOCUMENT_TOKEN_TO_BE_REPLACED

Health Ranger Mike Adams And The Death of Steve Jobs

As was to be expected, it didn’t take Mike Adams long to inform the world of the cause of Steve Job’s death. It was of course, as it always is, conventional cancer treatments – chemotherapy and radiation in particular – and not cancer, for in Mike Adams’s world-of-miracles-that-never-happen, there is no such thing as dying from cancer.

END_OF_DOCUMENT_TOKEN_TO_BE_REPLACED

Our Problem with Alternative Cancer Treatments

END_OF_DOCUMENT_TOKEN_TO_BE_REPLACED

Why It Is Morally Wrong To Believe Something Without Good Evidence: Arthur Schafer on The Ethics of Belief

Some time ago we blogged about the “ethics of belief”, in which we discussed the question whether a person’s sincere belief can exonerate him when something goes wrong due to the consequences of his belief.

In October 2010, Professor Arthur Schafer, Director of the Centre for Professional and Applied Ethics at the University of Manitoba, gave a presentation for the  Winnipeg Skeptics, on the “Ethics of Belief” which we are happy to post here:

END_OF_DOCUMENT_TOKEN_TO_BE_REPLACED

Suppressed by Scientists and Big Pharma: The Hidden Cancer Cure… But Which One?? 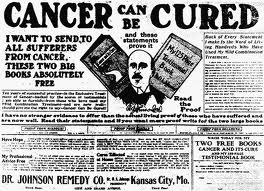 Altmeds keep telling us that “they”  (science and “big pharma”) know there is a cure for cancer, but that this knowledge is hidden from us, “so that the multinational pharmaceuticals could continue to make money. Where would they be if diseases like cancer were easily curable?”

END_OF_DOCUMENT_TOKEN_TO_BE_REPLACED

I just read on Orac’s Respectful Insolence that Kim Tinkham has died of breast cancer.

A few years ago Kim Tinkham was diagnosed with breast cancer. Inspired by Australian Rhonda Byrne’s book The Secret, she decided to treat her cancer with alternative therapy only.

An important part of Kim Tinkham’s treatment seems to have been Robert O. Young’s acid based therapy, which claims that cancer is always caused by excess acid in the body and consequently the only way to cure it is by adhering to an “alkaline” diet.

On several occasions, Tim Kinkham publicly claimed she was cured of her breast cancer thanks to alternative therapy. She appeared in several of Robert Young’s promotional videos (most of which have now been removed) and was touted by him as one of his success stories. 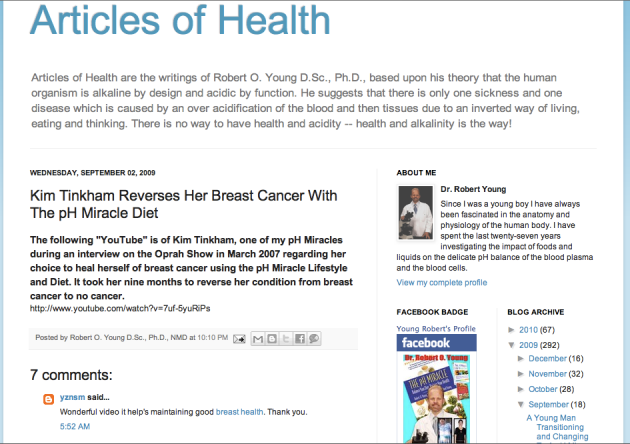 Kim Tinkham also appeared on the Oprah Show, where she explained how The Secret’s “law of attraction”, which claims that we attract what we think and feel, had inspired her and led to her cure.

Sadly, it was not to be.

The Curious Case Of Hollie Quinn And Her Miraculous Cancer Cure

Through a tweet by Blue Wode, who runs the brilliant website ebm-first, I learned of Hollie Quinn and her miraculous cancer cure.

At 27, Hollie Quinn was pregnant with her first child when she was diagnosed with breast cancer. In an article on the Huffington Post we are told that Hollie Quinn decided to decline conventional cancer care and treat her cancer with alternative treatments only. And successfully so, for she is still alive and healthy to this day, eight years later. To inspire other cancer patients, she and her husband wrote a book about her extraordinary experience.