Cancer, Fungus and Sodium Bicarbonate: Tullio Simoncini and How Not To Cure Skin Cancer

Tullio Simoncini, a convicted ex medical doctor, ‘discovered’ that cancer is no more than the fungus candida albicans, and that it can be cured successfully with sodium bicarbonate. Skin cancer is also made of candida albicans, but can only be cured by local application of Iodine – not sodium bicarbonate, like all other cancers. Says Tullio Simoncini.

By the way, there is no scientific evidence whatsoever that cancer is caused by candida albicans or that it can be cured with sodium bicarbonate – or with iodine for that matter.

On his website Simoncini publishes ‘evidence’ of his miracle cures. Most of these stories lack all essential medical information and are therefore virtually meaningless. However, in some cases a minimum of information is given, making it possible to find out what really happened. Invariably, heavy manipulation of data is shown, as in this case of a gentleman from Australia who suffered from skin cancer on his scalp.

This gentleman found himself having to travel all the way to Rome, in order to be healed by Tullio Simocini, because, as we are told in the video, his Australian doctors failed miserably to help him. The video is here. The case was analyzed for us by our Italian friend WeWee, who is himself an MD.

The gentleman tells us that he he had skin cancer, which was confirmed by a histological examination, and that his conventional treatment consisted of surgery and a number of treatments with ‘liquid nitrogen’. In the video it says that Simoncini’s treatment resulted in the cancer to finally disappear, something his Australian doctors could not bring about.

This patient appears to have undergone the complete standard protocol for skin cancer: surgical resection of cancer; examination of the tissue by the pathologist; follow-up procedure to reduce risk of recurrence  (liquid nitrogen), resulting in a complete clinical recovery.

When a resection of localized tumour (like a melanoma) is performed, it is essential that the whole area, including the tissue margins, is free of cancer cells. This is established by a histological examination, carried out by the pathologist. In the pathology report it states clearly whether resection has removed the complete tumour and whether the margins of the collected samples are free of cancer cells. 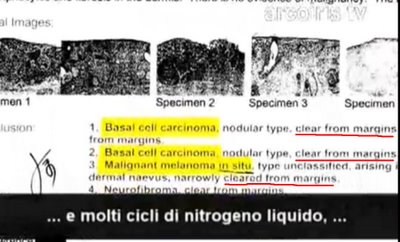 The cryotherapy rounds were given for extra safety.

Only after that came Simoncini’s treatment with iodine, which is supposed to have finally cured the patient. As he does more often, Simoncini uses the report of the patient’s successful conventional therapy to ‘prove’ the efficacy of his own sodium bicarbonate treatment.

But how can you cure someone who has already been cured…?

43 responses to “Cancer, Fungus and Sodium Bicarbonate: Tullio Simoncini and How Not To Cure Skin Cancer”